Is there a place for men in a mums’ world?

Once upon a time, when a woman had a baby, she assumed the role of Mother, which meant her studies were no longer of use and her home became her workplace. This, though, is no longer the case. Particularly in a city with living expenses as high as Sydney, most mums are working mums, well before their children have even started school.

We’ve seen a positive movement towards paternity leave, with a greater number of businesses recognising that dads benefit from, and deserve, to spend time with their young children too. 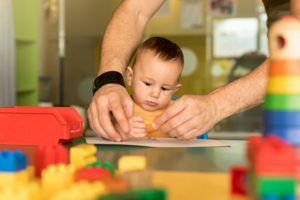 And in what might be a first for many men, these dads are finding themselves in a minority. Unlike mums who quite often have a few friends off on maternity leave at once, society hasn’t yet reached a point where just as many dads on paternity leave could say the same thing about their male mates. So while they’re facing a lot of the same challenges as a stay at home mum does, they’re lacking similar support.

If you’re a child of the eighties or onward, there’s a high chance you’ve heard of, if not been to, a local Playgroup.

You probably remember going along with your mum, putting something together with Clag glue, eating chopped fruit and playing Duck, duck, goose. It was, and continues to be, a fabulous place for kids under five to socialise, learn new skills and have some fun while their mums bond over the challenges of raising children.

Back in the eighties, dads didn’t feature heavily in this scene. But times have changed and Playgroup has changed with them. 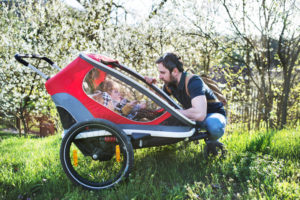 In the Sutherland Shire there’s now a specific chapter of Playgroup open for dads, grandads and other male carers to take their kids to. It offers them the chance to connect with other men in the community who are navigating the tricky terrain of being a stay at home dad.

Moreover, it means that their children don’t have to miss out on important opportunities, to play and learn alongside other kids, just because their dads are uncomfortable being the only man at a Mother’s Group.

The Dad Supported Playgroup is held in the Billa Road Hall at Bangor every Friday morning during the school term. It runs from 10am-12pm.

During the two hour group, there is music time, a craft activity, morning tea and of course heaps of toys and equipment for the kids to go to town on. Best of all? It won’t cost you a thing.

So if you’re a stay at home dad/grandad or one who works part-time, then you’ve got no excuse not to get out of the house and bring your kids along to join in the fun. And if you know a dad or grandad who’d benefit from bonding with other men in their situation, then do them and their kids a favour by spreading the word. 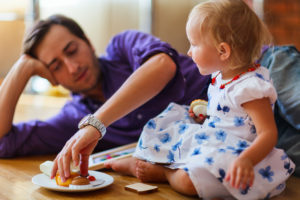 There are, of course, other Playgroups run at various venues throughout the Sutherland Shire for mums, grandparents, young parents, first-time parents and vulnerable groups too, so check out our directory or the Playgroup website if you’re looking for a Playgroup that suits your needs.

To register now, or for more information, you can call Rebecca Pragnell on 0439 010 312 or email [email protected].

The Sutherland Supported Playgroup program is proudly funded by the Department of Communities and Justice under the Families NSW program.

Why we need to think outside the pool fence

Play with a Purpose (Part Two)

Who’s open for dine-in in the Shire?

Water play and fun in the sand at...