A Day by The Beach at Don Lucas Reserve

On this sunny yet windy day we decide to head to Cronulla. We decide to meet up with the girl’s cousin, Master 5 who has come up from Wollongong for the day with his mum.

We make a plan to go to Don Lucas Reserve at Cronulla. It is located at the Wanda end of Cronulla at Mitchell Road. We head out a bit later in the day than usual as we decide to have lunch at the park.

After we head to the car and get the girls strapped in their car seats Miss 3 shouts “Water, water I can see the water. Duck pond”. Which is in fact the Georges River, so a pretty big duck pond at that.

As we come to the Highway, before heading down the Boulevard, we run into a bit of traffic. Miss 3 announces “we are going really slow”. Once we get past the traffic lights to turn down the Boulevard Miss 3 decides she wants to play eye spy.

We start with the usual green for the trees, blue for the sky before Miss 3 announces eye spy with my little eye something beginning with sparkle. Which in her usual fashion, if we have not guessed the answer within two seconds, she announces to us that it is her sparkly shoes. Which are a pair of shoes we brought in Hawaii for cheap, that are way too big for her, but she insisted on wearing them.

Once she is sick of that game she asks us if we are going to the Paw Patrol Park. I looked at my husband as if it say ‘what the heck is she talking about’, and he tells me that is the name she has given to Old School Park in Gymea. The girls and hubby have been back to that park during the week, but we are still yet to figure out why she calls it that.

I proceed to tell her that no we are going to a new park instead. Which she is disappointed about until I let her know that her cousin, Master 5 will be there. Which seems to do the trick and keep her happy for the rest of the drive.

We pull up to Don Lucas Reserve and find a parking spot easily right near the park. Miss 3 says “Oh look there is a beach there too”before we jump out of the car. 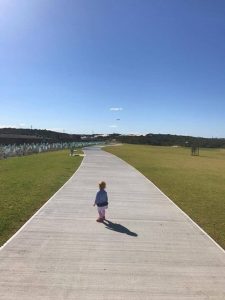 The park itself is not enclosed but the actual playground area is a little bit away from the road. Due to the way the playground is laid out though, with our girls being 1 and 3 we need to keep a close eye on them as it is quite a hilly area with the potential to step off the edge of the guttering in some parts.

We arrive about half an hour before Master 5 and his mum are due to meet us, so we decide to head to the playground.

It is quite a modern designed and as a result, the different pieces of equipment are relatively spaced out. 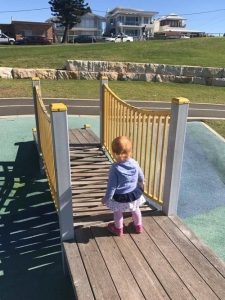 There is an area with two slides and a bridge, some netting that climbs up on a rock, a big net like swing, sandpit and water play and balance beams in the garden. 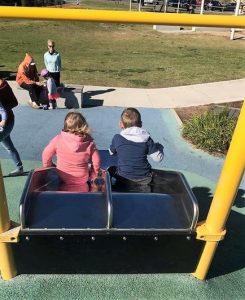 We head to the slide and bridge area first, but Miss 3 gets too scared to go down the slide so hangs out for a little bit running across the bridge with her little sister. Before deciding she wants to have a go on her scooter. 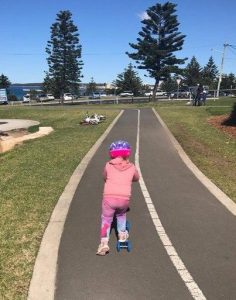 The park is awesome for scooters and bikes as there is one big track that goes all around the reserve, as well as other little paths throughout that are suitable for the little kids.

Following a ride on the scooter, we head to the sand pit and water play area. There are some wheels that you can turn and water comes out of a tap. I don’t quite get the mechanics of it, but I think the water gets recycled through it over and over again. 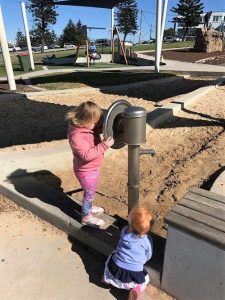 If not we wasted a lot of water as Miss 3 absolutely loves anything that resembles a steering wheel. So spent a long time spinning the wheel and watching the water come out like it was magic.

After spending some time here I mention to hubby that I need to go check out if the toilet facilities are okay so I can write about them. Miss 3 decides she needs to come along with me.

There are about 4 toilets here and for where they are and the amount of people that must use them they are pretty clean. There is one that says it has a baby change facility but when we went in there I could not see a baby change table anywhere. So that is just something to bear in mind.

We head back to the park and Miss 3 says to me “mum you forgot my helmet” as she looks around on the ground for it. I say to her “Lily it is in your hands”, thinking to myself ‘oh no she is so much like me’. I lose my sunnies on my head or lose my phone when it is in my hand or even when I am talking on it far too often than I care to admit.

By this time the girls are joined by their cousin Master 5. Since it is time for lunch I decide to head to the cafe which is a few minutes walk from the park to grab us all some lunch. 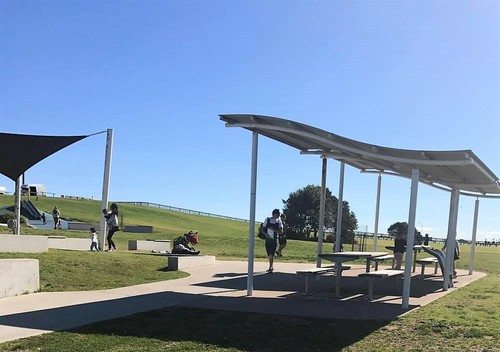 I bring it back and we use some of the picnic tables that are in the reserve. There is no BBQ facilities here like some other places but there is bubblers.

After eating lunch we don’t spend a lot more time here as the wind has really picked up and it started getting a bit too much for us.

Overall we really liked this park, but think it would be a little bit better when our girls are a couple of years older. During the summer months I can imagine it will be a lot busier with the new housing coming at Greenhills Beach and the general increase in visitors over summer.

So for us, it was a nice one for us to visit in the quieter months.

On the way home we drive past Shark Park and Miss 3 starts chanting “Go Sharks Whales” or at least that’s what I thought she was saying. So I tell her no hun they are just Sharks. But she insists on the Whales part too. I ask her where she learned about Shark Whales as I had no idea she knew who they were from the logo. And she said she knew from Kindy.

Hubby soon works out she meant New South Wales as they had dress up days for the recent State of Origin. So she was combining the Sharks Grand Final celebration they had with the New South Wales origin to chant “Go Sharks Wales”.

There was no convincing her it was anything else so the chant reigned for the rest of the car trip home.

The Best Streets for Trick or Treating in the Shire

Choccy-Free Tips for an Eggcellent Easter!

A day out in… Sutherland

A Walk Through the “Forest” at Centenary Park...