written by Mums of the Shire Guest Contributor July 5, 2019

That’s the overwhelming response I received from my fellow mum friends when I told them I was taking my newborn and almost three-year-old to the UK to visit their grandparents – alone.

On a whim, I decided that it might be nice to spend the festive season snuggled up in Christmas jumpers, sipping hot chocolate and re-connecting with family and old friends… I mean it’s just 22 hours on an aeroplane, right? How bad could it be?

I tapped into the wisdom of a few well-travelled mums, sought out the sage advice from this wonderful MOTS community, and Googled extensively. Turns out that if you search “How to survive a long-haul flight with two kids” you can read first-hand accounts from people who have actually done it, AND lived to tell the tale! Yep, Bear Grylls has nothing on these intrepid mammas.

I planned meticulously for this journey; having done it many times alone, and with one child, I had a sense of what I was in for and what the pain points might be. I planned and hypothesised on every possible scenario, I packed, and unpacked, and packed again.

And, guess what, it was totally fine and completely do-able. I even managed to watch a couple of movies on the flight! I only wish I had spent more time considering how I was going to entertain two small children, in the middle of winter in the Northern Hemisphere. Two forces of nature rising at 6:30am and ready for adventures, and the sun doesn’t come up for another two hours! The UK in December enjoys six measly hours of daylight. Cabin fever for my always-on-the-go, outdoor type is most certainly a thing…

So, aside from visiting your long-haul destination in SUMMER! Here’s what I learned:

TALK TO YOUR KIDS

If they are old enough to understand, explain how the journey will play out. Describe little details like bag check-in, security etc… Let them know that they’re going to eat, sleep, go to the toilet and watch TV on the plane. It’s a big deal for them, an adventure, and if they know what to expect, chances are they will take it all in their tiny little stride.

The time of day you choose to travel is crucial. And, there are no hard and fast rules, some recommend travelling at night, so kids sleep, some say a day flight is best so you’re not wrangling cranky sleep-deprived monsters. Trust your instinct.

Just because it’s night-time, don’t assume your child is going to sleep. Getting through check-in, security and boarding with an overtired infant is no fun. Plus, the general hustle and bustle, unfamiliar sights and sounds of the airport can be hugely over stimulating. Add to that a delay at the gate, and you could be the one with a screaming, inconsolable child who is dog-tired, but will not settle. I’ve been there, it’s not fun!

We booked a sprightly 6am flight which worked for us for a number of reasons. It meant I could get up, feed tiny bub, shower, dress and have all bags loaded in the car and ready to go, all while the toddler was still fast asleep and non-the-wiser. Then, just as it was time to go, I lifted my two-year-old out of bed and into the car in her pyjamas (I was sure to explain to her that this would happen the night before).

By the time we arrived at the airport check in, bub was asleep in the baby carrier, fed and settled, and my toddler was bright as a button and ready to start her adventure with wide-eyed wonder. She was patient, excited and had a good night’s rest under her belt.

Another positive of the so-called red-eye flight (let’s face it, for us mums, it’s probably standard wake-up time), the first flight of the day is less likely to be delayed. I was also pleasantly surprised to find none of the duty-free shops were open, thus eliminating any pestering for lollies, toys and games.

TAKE YOUR TIME AND CHOOSE WISELY

Wherever you’re headed, there are a wealth of airlines and routes to choose from when travelling long-haul, and each have their various pros and cons.

DO NOT CHOOSE THE CHEAPEST FLIGHT! They usually mean longer flight times (sometimes an extra 10 hours or more), more stops or more time hanging around airports, which means you’ll end up incurring more costs trying to entertain the kids.

If you’re booking your own seats, pick-out your preferred options online. Go over it all with a fine toothcomb. When you’re ready to confirm, be sure to book directly through the airline instead of a third party. Better still, call them to go over your travel plans, and they can tip you off about quieter flights, confirm your seats there and then, and pop you in the best spot – sometimes with spare seats. They will also make sure you have a bassinet if you need one.

There is much debate about which airlines are the best for travelling with kids, but at the end of the day, it all comes down to how busy the cabin crew are and how much the individuals working that particular shift actually like kids. Some will coo and smile and seek you out for a cuddle, others will let you get on with it unless you specifically ask for help. Remember, in-flight nanny is not their primary role, so they will assume you are okay, unless you speak up. If you’re struggling and need another pair of hands to hold bub while you go to the bathroom, then press that call button. Even though you’re frazzled and on a short fuse, remember to smile and be polite. You might be surprised just how much perfect strangers are willing to help if they spot that you’re in a pickle.

Don’t take more than one person can carry. It’s tempting to pack for every possible scenario and totally over-think what you might need, but chances are you won’t get to use most of it. There’s no point in hauling your family’s entire wardrobe, halfway across the world for nothing, you can easily have clothes laundered while you’re travelling to avoid unnecessary baggage.

In terms of bulky, but essential items like car seats and prams, if you’re travelling alone without another adult to help you wrangle baggage, consider hiring items at your destination. Some folks rave about the new generation of travel prams that fold up and fit into the overhead locker. These work really well if there are two of you, but alone, it’s just another awkward thing to carry on and off the plane while you have small people to manage. The same goes for any in-flight gadgets such as inflatable leg-rests and the like. Remember you’re the one who has to cart it around, set it all up and there’s always a chance that the airline will tell you to put it away. Unless you’re planning to travel frequently, these items can add considerable expense to your trip.

Look online for a second-hand umbrella stroller that you can check in at the gate, and if it gets bashed up, it’s not a worry – I’ve had a pram go missing and lost a hood on two different trips.

If you are staying with a friend or relative, don’t be shy about asking them to borrow items, or scour Facebook market place for second-hand stuff at your destination. Chances are there’s someone nearby with an attic full of nursery gear they’re dying to offload. And, when you leave, you can pay it forward to someone else.

A good quality baby sling and a lightweight stroller were all I needed for my trip. Bub spent most of his time in the carrier, and my toddler walked and hopped in the stroller when she needed a rest.

Relax the rules, now is not the time to enforce strict screen time limits.  If your kids are happy to watch Paw Patrol for six hours straight without a peep, just let it go. The same goes for snacks and treats, keep them up your sleeve for when nothing else, but a bribe will work! 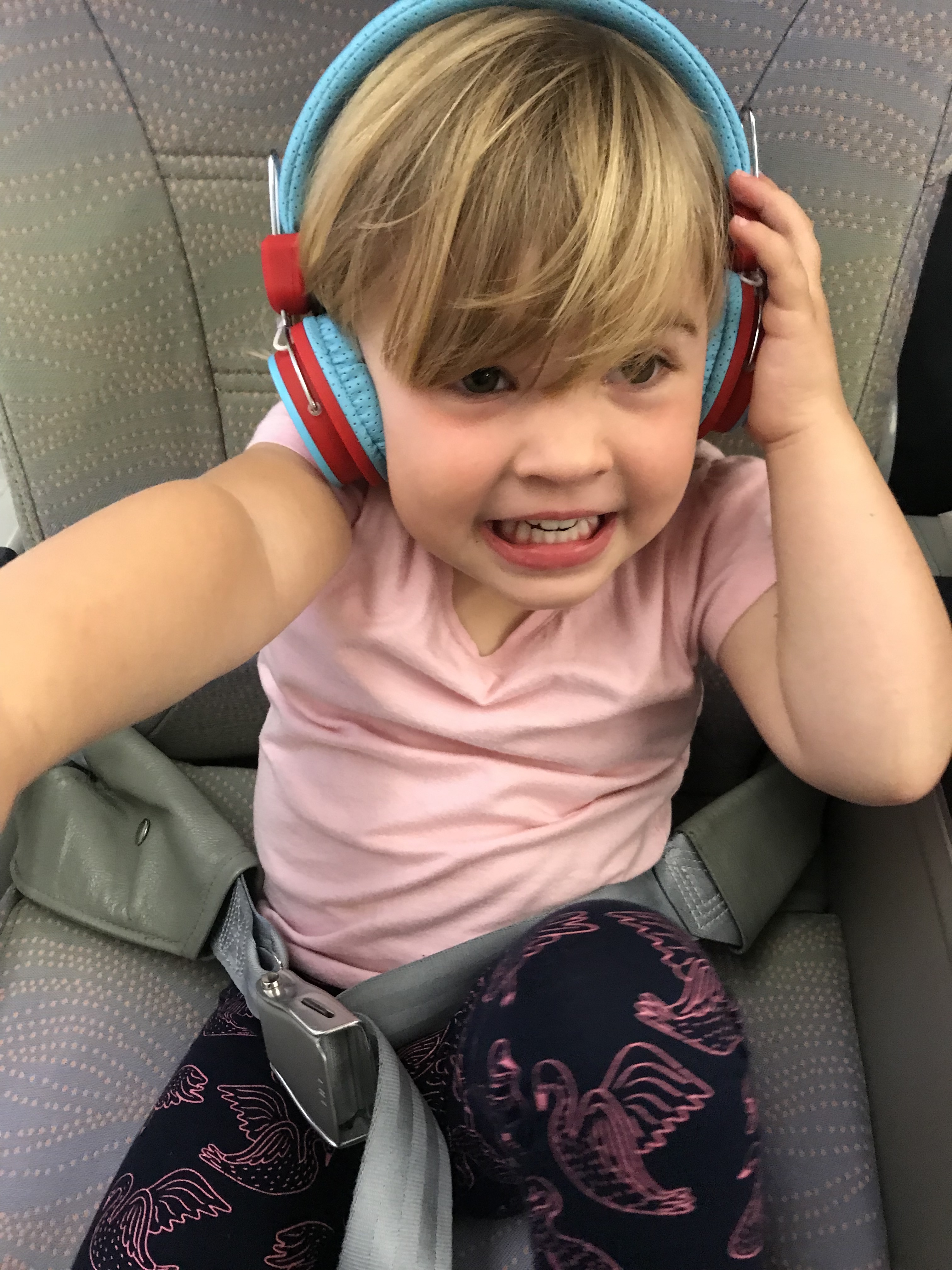 Before travelling, I read lots of advice about wrapping up small presents to surprise your child and keep them entertained throughout the flight. I spent a long time in the lead up to the trip picking out small toys and wrapping them, so much so that half my carry on was ‘entertainment’. In all honesty, the extra bulky hand luggage really wasn’t worth the effort. There was so much ‘new’ stuff going on and so much to take in, my toddler really was not interested in the magnetic farm set or mini playdough activity that I’d thoughtfully created for her.

Instead, I wish I’d taken a change of clothes for myself, so I didn’t have to spend the whole flight covered in vomit and pee, thanks to an overfed, sucky bub with sore ears and a toddler in the midst of toilet training!

ACCEPT THAT SH*T IS GOING TO HAPPEN

From nappy blow outs to epic meltdowns, that’s just the reality of travelling with kids. Like the time my daughter insisted she needed to use the bathroom, minutes before boarding our connection in Dubai. We’d already cleared security and were in a small holding pen, with only ONE PUBLIC TOILET. Miss almost-three sat on that can for TWENTY MINUTES, periodically shouting “I am doing a poo Mummy!” while a line of restless and huffy passengers lined up in front of the much in-demand loo, also serenaded by my screaming baby writhing in his carrier!

Just like kids, travelling can be unpredictable, and you may experience some curveballs. Try to remain Zen (I can see you rolling your eyes!) and go with the flow. If nothing else, you’ll have a story to dine out on at the end of the trip! 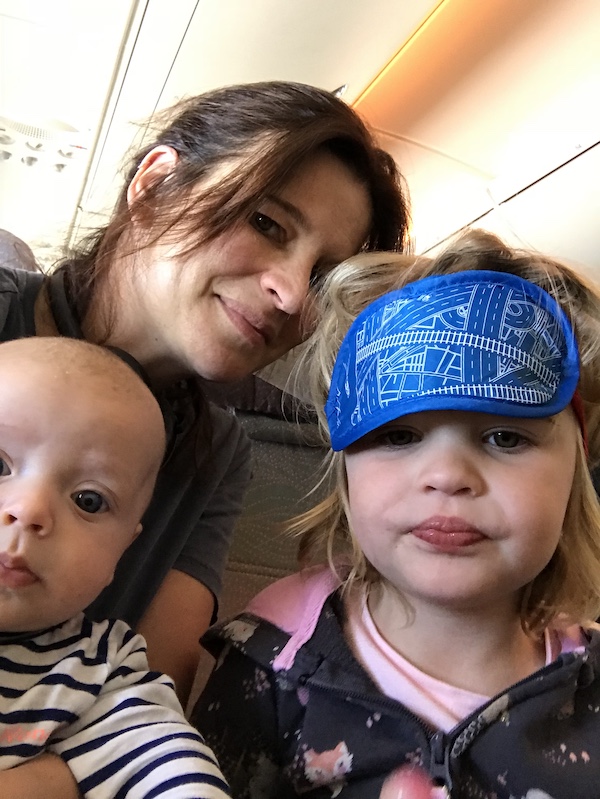 Mums of the Shire Guest Contributor

Camping with under 5s

Breastfeeding and pumping while travelling

Surviving a Road Trip with Kids