When Go! Kidz offered Mums of the Shire team a chance to try a variety of meals from their healthy kids’ meals range we, naturally, jumped at the opportunity.

After all, what working mum wouldn’t be delighted to have the task of getting dinner ready taken off her hands? Go! Kidz ready-to-eat meals are delivered contactless Sydney-wide.

It would, in fact, be our children doing the taste-testing, as the new, Shire-based meal delivery service caters to kids. This is not to say, however, that we wouldn’t be sneaking a few bites too.

Below are the meals that either one of both of our families tried and our honest thoughts on the taste, nutrition, meal size and value for money of each.

But first, a bit of background from each team member about their family.

Mia: I have two little ones, four and six. Both can be fussy little eaters at times but they’ll usually try new things when persuaded (bribed with dessert). Our regular at-home meals are crumbed fish, crumbed chicken and bolognese so I tried the Go! Kidz version of these (Chicken Nuggets, Fish Nuggets and Pasta Bolognese) as I thought it was my best bet at getting them to eat them. I didn’t bother with the options which they have never been served and which they have never selected from a kids menu themselves.

Kirrily: I have two kids who are currently five and three. It feels important to first state that they are notoriously picky eaters – the kind that don’t like their meat touching the vegetables that they almost always refuse to eat. Between them, they like about four kinds of vegetables, bacon and plain pasta, so getting them to eat any meal is a challenge.

Kirrily: We’d been given a 300g Lasagne serving size (cost $6.95). This is the largest size and suitable for ages 11+, so it was big enough to feed both my two young ones. I baked it in the oven because I just don’t feel like microwaved lasagne meals are quite the same. The kids approached it with the reluctance they typically express towards dinner before each starting to have a few mouthfuls. It wasn’t a rich lasagne sauce, which suited my kids’ sensitive little palates well. Both kids preferred the pasta to the mince and ate all but a few mouthfuls, which I happily finished.

Kirrily: I wanted to get dinner on the table in a hurry so opted to microwave the Cottage Pie rather than bake it. Microwaving the 300g serving size only takes 6 minutes. I hadn’t realized until I’d started microwaving it though that to heat it right through I’d need to stir through the mashed potato that was initially sitting on top. This messed with both the presentation and the taste and in hindsight, I definitely should have baked it in the oven. Fortunately, the kids weren’t overly bothered. I divided the meal up to create two servings. Once they got past the fact that they didn’t like the way it looked, the kids ate most of it without any more urging and described it as really yum. Even the visible diced veges didn’t seem to bother them.

Mia: I made the mistake of defrosting two packets of nuggets well before diner time. The meals do not need defrosting and there is enough for about three serves in each packet (great value!) so I really only need to pull one packet out of the freezer right before cooking. I gave the nuggets a generous coating of oil using a good quality olive oil spray and popped them in the oven for the suggested time.  The crumbs came out nice and crispy and the fish was thick and fluffy with a lovely mild flavour (not too fishy). The kids covered them with lemon juice and mayo and inhaled them. They said they like my fish recipe better (of course, haha) but I think that’s just because it’s what they’re used to. I have no doubt these fish nuggets would become a favourite in our house if served on a regular basis.

Kirrily: There were twelve large Fish Nuggets in the 300g serving size ($6.95). We tried them two ways: 1. Oven-baked 2. Pan-fried in a bit of oil. There was a clear winner. When baked in the oven, the big fish morsels tasted beautiful and fresh but the crumb coating was a bit dry. The kids ate about half the fish nuggets they’d been given. When pan-fried, however, the oil made the coating moist and crunchy. We even went a little further adding salt and some lemon juice and after doing that the nuggets were virtually inhaled!

Mia: Both times I served the chicken nuggets we were in a bit of a rush to get dinner done so I went for the fast option: deep-frying. Admittedly, this isn’t the healthiest way to cook them, but it was so quick, easy and the kids loved them. My kids are used to me using healthy ingredients like quinoa (which is used in the crumbs). On one of the nights, we had a little friend staying over who prefers the more traditional bread crumbs/batter and she wasn’t as big of a fan of these healthy crumbs, but she happily picked the crumbs off and ate the yummy chicken breast filling.

Kirrily: I microwaved the Vege Loaded Mac n Cheese and divided the 300g serve up between my two kids. Though it’s a very-low sugar dish (only 3.3g per 100g) it tastes quite sweet as it’s made using 12% sweet potato. My kids don’t like sweet potato and probably for the same reason, didn’t much enjoy this pasta. I, on the other hand, loved the creamy texture and the fact that the meal was both low-sugar and low-fat and it soon became my dinner while they finished off the Fish Nuggets instead.

Mia: I think most people, including kids, love their own (or their mum’s) bolognese recipe so I was really interested to see how the kids would go with this one. Again, I was in a bit of a rush at dinner time (which is when these meals really come in handy), so I used the microwave for this one. Initially, both kids turned their noses up and refused to eat it so I started making them something else, but before I could get the next thing on the table Mr Four was licking his bowl and asking for more! One out of two ain’t bad! And Miss Six was quite happy with the leftover nuggets served with avo, tomato and cucumber. So easy… 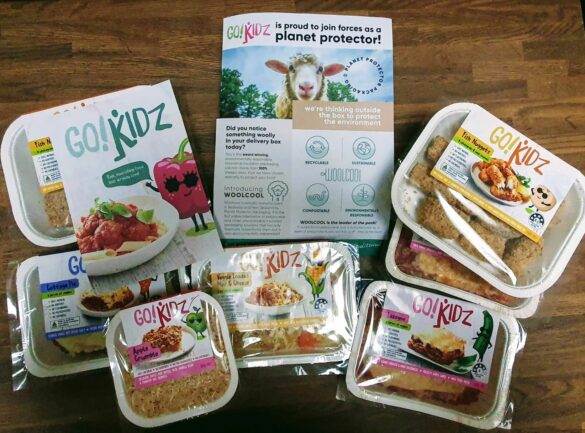 And from their new dessert range…

Kirrily: If only the kids had known how good this dessert was going to be, they may have eaten all their other meals more quickly! My very fussy son doesn’t like fruit so was put off eating the dessert as soon as I told him what it was called. My daughter and I didn’t mind one bit that we wouldn’t have to go thirds and practically raced to the bottom of the sweet, crunchy, fruity bowl of goodness. My only constructive note for the Apple Crumble was that the oven baking time was a fair way out for me. The packet suggested baking for 10-15 minutes until pie is warmed through, but it took me 22. I’d suggest you stick it in the oven just prior to serving dinner so that your dessert is ready to go when the kids are done eating their meals.

Mia: Well, I’d like to say my kids liked this one but unfortunately for them, they didn’t get a chance to try the deliciously healthy version of a chocolate brownie. Mum (me) got a craving when she read “sweet potato brownie” and selfishly enjoyed every bite on her own. Needless to say, I will be ordering these on a regular basis and wish I had one in front of me right now.

You can read more about Go! Kidz here or find their full range of meal options on the Go! Kidz website.

Play with a Purpose (Part Two)

The Beginner’s Guide to Being a Low-Waste Family

Help is here! Where to find support in...

Why supporting small businesses has never been more...

How to get the best food in the...

7 Reasons to Race to The Shire Christmas...