Melissa Dennis, from Miracle Babies Foundation, spoke with one local mum about the premature birth of her baby Audrey and how it impacted her.

When did you first discover that your pregnancy was high risk, and you wouldn’t be able to deliver naturally?

It was a terrifying discovery and meant that I needed to slow down and take extra special care of myself.

When I reached 26 weeks, something happened that didn’t feel right.

I felt a strange leaking sensation. Filled with panic I slowly made my way to the bathroom praying that there wasn’t any blood. I was relieved to see that it was only clear liquid, and I didn’t think too much of it at first. I went back to my desk and continued to work until about 20 minutes later when the liquid started running down my legs.

At this point, the panic started to set in and I urgently called my Obstetrician, who advised me to make my way to the hospital where he would meet me to investigate what was happening. We discovered that the leaking fluid was amniotic fluid, and this meant that my waters had broken.

What was going through your mind at that stage?

To be honest, at this moment my head was spinning. I couldn’t believe that my waters had broken and didn’t really understand what this meant as I had never known anyone to have a premature baby and had no idea what journey lay ahead.

Very premature babies require the highest level of care and this can only be provided by specialised hospital units called Neonatal Intensive Care Units (NICUs). With no NICUs in the Sutherland Shire, where were you transferred to?

I was sent straight to the Royal Hospital for Women in Randwick by ambulance. As soon as I arrived, I was greeted by some amazing nursing staff that tried to put my mind at ease whilst still being honest about my situation and was given my first steroid injection to help the baby’s lungs develop, giving them a fighting chance at survival. I was put on bed rest and remained in hospital until I delivered Audrey.

Three weeks in hospital, away from your husband and young son and hoping not to deliver before 30 weeks, how was that experience for you?

It was very challenging being without my loved ones at a time when I was so afraid of what was to come. I was grateful for their visits and just kept reminding myself that I was in the best place for Audrey and each day I kept her safe inside was the equivalent of four fewer days in the NICU. I had a goal of getting her to 30 weeks gestation as this was a safer window with slightly fewer risks and better outcomes for the baby.

Knowing that Audrey would be delivered early, were you able to prepare yourself mentally for what lies ahead?

The hospital staff prepared me well for the early arrival of Audrey and familiarised me with the equipment that she may require and what potential outcomes can be expected at each week of gestation. They also gave me a tour of the NICU so that I was as best prepared mentally as possible, and I believed it helped me survive the transition from being pregnant to having a premature baby in the NICU.

After spending Christmas Day in hospital with your husband and son, what happened later that night?

During the night, I discovered I was bleeding. A nurse monitored me through the night and soon I started having contractions very low in my uterus.

By 7am I was taken to theatres where the Registrars were contacting the specialist to try and decide the safest way forward.

With your contractions intensifying and knowing the risk of Vasa Previa was far too high to deliver naturally, you were urgently rushed into the theatre for an emergency caesarean. How did you feel giving birth to Audrey at only 29 weeks?

Unfortunately, my husband couldn’t make it in time to be with me in theatres but arrived just in time to meet our beautiful little girl. Audrey’s due date was 13 March 2019 however she arrived by emergency caesarean on 26 December 2018 at 29 weeks gestation. It still blows my mind that she wasn’t even born in the same year as her due date. 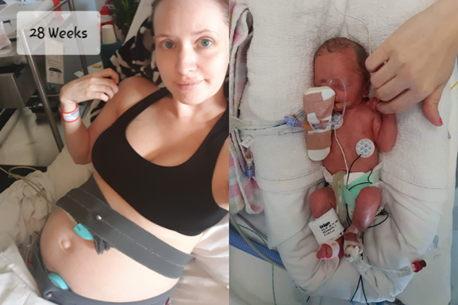 Audrey was quickly assessed in theatres then was taken straight to the NICU for her admission. My husband was able to go with her while I went to recover from the surgery. I was able to meet our little lady a few hours later. It was such a relief to see her beautiful little face and to see she was stable.

She was on a CPAP breathing machine and remained on that machine 24 hours a day for four weeks.

After already waiting 3 days to hold Audrey for the first time, I’m sure you wouldn’t have wanted to let her go. What was it like leaving the hospital while she remained in NICU?

I was able to stay in the hospital for one week after Audrey’s early arrival and was dreading the day that I had to be discharged. I couldn’t bear the thought of going home and leaving her in hospital but I also knew that my son needed me at home after being in hospital for a month.

I was discharged on New Year’s Eve and spent most of that night in tears and really struggled to leave her and come home empty-handed, thankfully the NICU nursing staff were amazingly supportive and were happy for me to call at any hour to check on her. It was very challenging being at home and expressing breast milk three-hourly day and night with no baby with me.

What milestone did Audrey need to reach in order to be transferred from a NICU to a local SCN?

At six weeks Audrey went on to low-flow oxygen and was then able to move to the Special Care Nursery where she remained for a few days until we could find her appropriate care at a local hospital. We were very lucky to have Audrey transported to the Kareena Private Hospital Special Care Nursery which was a five-minute drive from home.

Describe the feeling of taking Audrey home for the first time after 10 weeks in hospital, and still all before her actual due date.

At 10 weeks old (39 weeks and 4 days gestation) Audrey weighed 3080g and was discharged home and we could begin being a family of four! I was nervous to take her home as she still felt so little but I was so happy and excited to finally hold my baby girl in my arms anytime I wanted! It was such a long journey and we were so lucky to have a relatively smooth journey.

I can’t believe Audrey will be celebrating her third birthday next month!

What do you wish you knew before having a preterm baby?

I wish I had known more about premature babies before going on this journey and that’s why I would like to raise awareness as it is so much more common than I realised. We are so lucky to have such wonderful health services available to us and our babies and the life-saving equipment that is largely donated by the fundraising efforts of local charities is truly incredible. 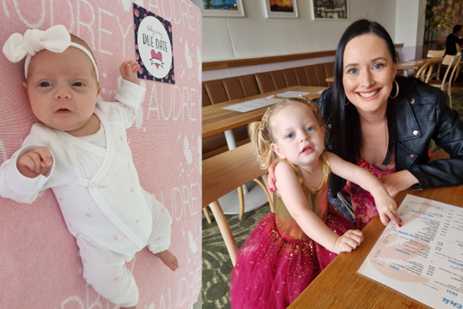 Do you have any advice for other mum’s going through a similar situation?

I journaled and took a photo every day throughout our whole journey. I found that to be therapeutic as you could see her progress each day in the journal which I have now turned into a book for Audrey.

Thank you Kristina for sharing Audrey’s story. In doing so, you’ve raised awareness for families of premature and sick newborns and provided comfort to families going through a similar journey.

If you or anyone you know would like more information about Miracle Babies Foundation, including the support, resources, and information available for parents of a premature or sick newborn, please visit: https://www.miraclebabies.org.au/

Melissa is a local mum with two young boys and works as the Media, Marketing & Communications Officer at Miracle Babies Foundation. Having experienced a premature birth with her first son, this is a cause close to her heart.

Are you run-ready? Tips for new mums and runners

The new service helping you free yourself from...

The reality for parents of premature babies (and...