Though often thought of as an industrial area, there’s quite a lot for kids to do in Taren Point. Better yet, many of the activities aren’t weather-dependent, so you can get out and about with the kids even if it’s pouring rain.

Full disclosure, we have done all the below activities but didn’t do them all on a single day. Obviously, you can if you like, or you can pick and choose your own adventure based on your budget, the weather, your kids’ ages or your mood!

Start your day off by taking the kids to Flip Out, on Parraweena Road. If you haven’t heard of Flip Out before, it’s a trampoline park and an excellent place for kids to burn some energy (particularly in crappy weather.)

The venue has a car park out the front, so unless it’s a crazy busy weekend you shouldn’t have any issues parking (and even then you’d probably be fine finding on-street parking as most the surrounding businesses close on weekends.)

We visited on a rainy Tuesday morning and had suspected it might be pretty busy, but with COVID restrictions in place over-crowding was never going to be a problem. 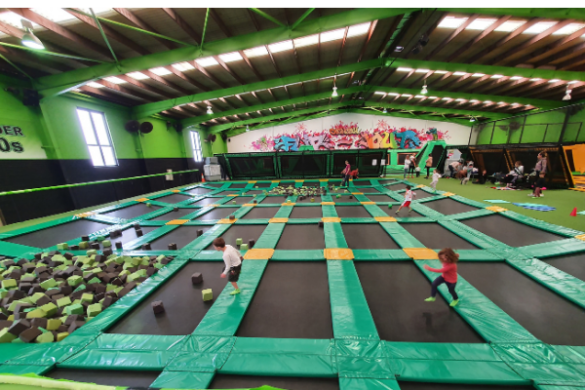 You’ll need to sign a waiver and purchase socks before you can go in. Currently, on Monday, Tuesday and Friday mornings Flip Out hold Playgroup sessions from 9am-12pm. In addition to getting three hours to jump, there are also games, puzzles, hula hoops, colouring-in, tunnels and soccer drills set out for the kids to use. It costs $20 for one parent and child and an additional $10 for each extra child.

Flip Out is a huge place with three very large trampoline areas and then a few separate trampolines and a large foam pit. My kids started by racing to the designated under ten’s trampoline area, which has a couple of foam pits within it. By the end of our stay, I think they’d jumped on every single trampoline available.

My kids (who are four and five) weren’t too interested in the Playgroup bits and pieces, but they did have some fun with the hula hoops. 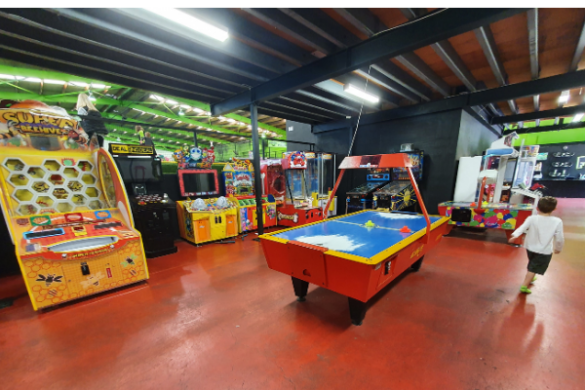 We stopped for a break in the middle and I let them play an arcade game each, where they won enough tickets to buy two lollipops, which gave them enough energy to jump around for a while longer. We’d been just about to leave when some friends showed up so then they were happy to continue jumping until it was time for lunch.

Taren Point Hotel has always been a place that’s very welcoming of families. They used to have an enclosed kids’ room, which was replaced by a play area at the back of the venue. Since COVID they’ve removed the large blocks and small play equipment that was there, but as life begins to normalize we hope to see the return of these soon.

In the meantime, there are kids activity packs available and if you’re visiting during the school holidays they routinely hold activities like slime workshops, pizza making classes and bingo for the kids. 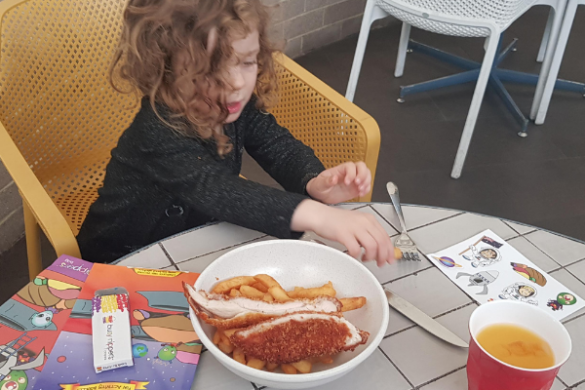 For my kids, sitting in bright yellows chairs set against blue walls beneath string lights and hanging palms was about as close to a holiday as we’ve had in a few months! And they loved the novelty of it all.

The “Ankle-biters” menu offers great variety for kids including pizza, pasta, poke bowls, burgers, shnitty, chicken strips or fish. My daughter chose the chicken strips and chips and my son opted for the battered fish and chips. For an extra $3 you can include a drink and ice-cream cup so we got the meals for $12 each (or $13 for non-members) and activity packs for $1.50 each. 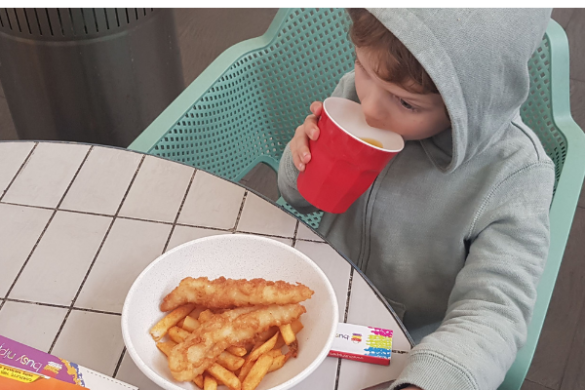 The salt and pepper squid with aioli ($17) sounded pretty good to me.

The kids got busy colouring and stickering, and sipped on their orange juices while they waited for their meals, which were ready very quickly.

The salt and pepper squid was cooked to perfection and I polished off every last skerrick. It was the kind of good where you’d probably lick the bowl clean if you weren’t in public. 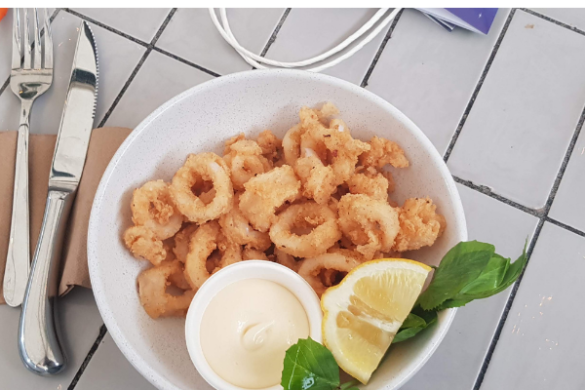 While my kids were not able to finish their servings, they both said their meals were very yummy. I tried some and had to agree that the fish, in particular, was moreishly crunchy. Both the chicken strips and fish strips were served in a bowl, which made them a bit tricky to cut up. Maybe smaller fish fingers and nuggets, or serving the dishes on plates, would be preferable.

The ice-creams that come with the kids’ meals are small cups of vanilla, chocolate or strawberry, and though they’re not particularly exciting both kids still made light work of them. 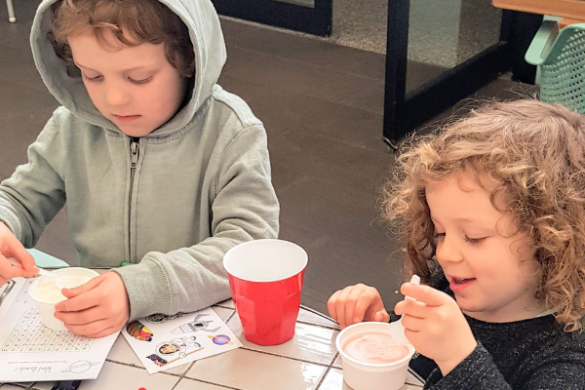 In great news for families, Taren Point Hotel has now refurbished and reinstated the kids play equipment after it was removed due to COVID. Table tennis bats and balls are now available for hire so that they can be sanitised between uses. 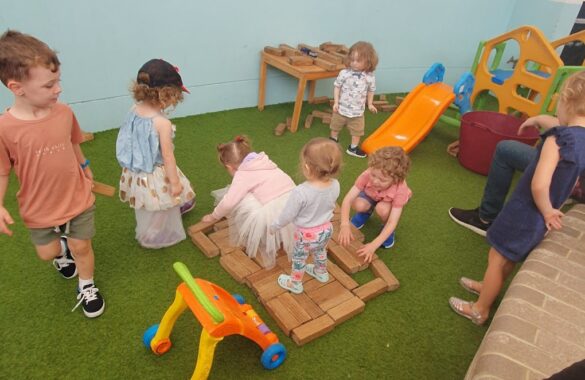 Taren Point Hotel is conveniently located next to IGA if you need to grab some groceries.

With rested legs and full tummies, you can then head to…

We’ve had some successful and not-so-successful (read: punishing) walks along the Taren Point Foreshore. If your kids are young enough to stay in a pram, it’s an easy and excellent walk with some pretty views of Georges River. Kids old enough to confidently ride their bikes and scooters will also be happy here.

The Foreshore walk stretches almost 4km if you’re up for a long walk (maybe sans kids), but if your kids aren’t likely to last long you can park on the corner of Smith St and Alexander Ave. From there, you can do the short stretch (about 4 minutes walk) along the foreshore that loops back via the Taren Point Shorebird Reserve or just turn around and head back when you reach Woodlands Rd. 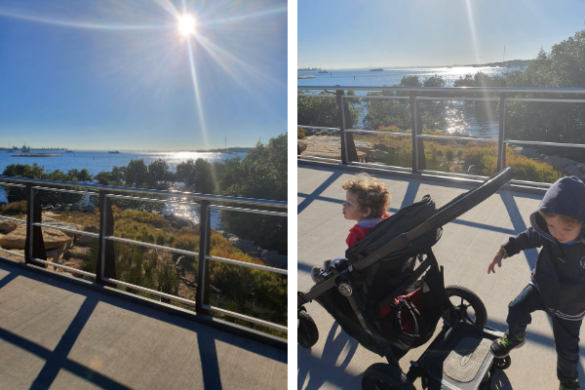 Not ready to head home? Then make a stop at…

Don’t be fooled by the name, this is not an aquarium in the way that has huge exhibitions or penguins or polar bears. That said, you also don’t have to trek to the city, wait in line or pay to get in. There is a large shark tank (or at least was when we visited), and an impressive variety of tropical and saltwater fish that the kids will love to look at.

Majestic Aquariums also shares a shopping precinct with several other shops including Baby Bunting, Discount Party World and the Home and Gift Warehouse- so it’s in a handy spot if you need to pick up something else.

Other great places to visit in Taren Point include Taren Point Bowling Club (an excellent spot to return to when they reopen the kids’ playground) and The Play Cave.

Looking for another day out? Head here.

A day out in… Woronora

Sunday Fun with the Kids

A day out in… North Cronulla