There is still lots of well known parks for us to explore in the Sutherland Shire. But we have also made it our mission to try and uncover a few other hidden gems. Places that are usually only know by the locals.

So this week we decided to give a new park a chance, Lakewood City Reserve at Bonnet Bay. 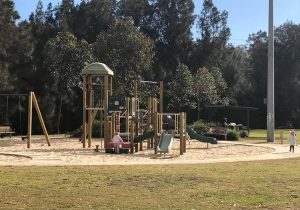 My memories of Bonnet Bay take me back almost thirty years. For anyone that grew up in the Shire during the late 80’s and early 90’s, you might remember that Bonnet Bay was what any kid’s Christmas dreams were made of.

Every house in the suburb back then had some Christmas lights on display. We used to go and look at the lights every year and then get an ice cream from the Mr Whippy who would be positioned down the bottom of the hill at the oval.

My husband has never quite understood my love of Christmas lights, but it was all born from those moments.

Jumping back to the present day, we piled into the car and headed towards Bonnet Bay.

Miss 3 asked if we could go to the park that she saw her cousin at last week. And I let her know that we were going to try out a new one.

She was disappointed, then quickly distracted by going down a big hill and saying “wheeee this is like a rollercoaster. I love roller coasters”.

No. I am pretty sure you don’t Miss 3. Given the tears we experienced on just the merry go round at Sea World last year.

After a few more hills up and down we arrive at the park. It is located at 5 Coolidge Crescent Bonnet Bay. The playground is joined onto the football fields.

It is a beautiful little spot, Right next to the river. There are some little kids playing soccer on the fields, but we have the actual playground area mostly to ourselves.

Compared to some other parks we have been to, this one is really clean and modern. I was slightly nervous about how close the playground was to the riverfront. But thankfully our girls were happy just to look from a distance.

The ground for the playground itself is sand, which is right up Miss 1’s alley. She zoomed straight in on a bucket and some spades that were lying in the sand. They belonged to a little boy who was over near the BBQ area so I figured it was ok to let her play until he came back.

There is one BBQ at the park and a couple of picnic tables. As well as a heap of open space for a picnic. However, it was quite windy on the day we went, so a picnic would have just involved me trying to keep everything from flying away.

After about ten minutes of Miss 1 playing with the bucket and spade the little boy came back. He was not too impressed with his toys being played with so I scooped Miss 1 up and took her over to the swings.

There are two swings at the park, both suitable for the little ones. There is also an area with steps and a slide for younger children to use. As well as a bigger slide and a rope climbing area and fireman’s pole.

The little slide was the only one Miss 3 was brave enough to have a go at.

As with most visits to the park, Miss 3 decides she needs to go to the toilet. There are toilets located at the football clubhouse building. Whilst I do not go to them this time, hubby tells me that they passed the toddler test so they must be OK.

Before we left, Miss 3 decided she wanted to play hide and seek. She does not quite get the concept that you are supposed to close your eyes when you are counting. Either way, we hid behind a few telegraph poles before she got bored of that and decided she had enough for the day.

Overall this park was nicely maintained and got Miss 1’s tick of approval for the massive sandpit. Miss 3 did not mind the slide and the swings, but on the car ride home she told me “I don’t want to go to this park again. My shoes have sand in them”.

Personally, I think she is a little bit of a harsh critic. I thought it was a beautiful local park, and there is an awesome kid friendly cafe up the road that you can drop in for a bite to eat.

Getting Iron Intake Right for Infants and Toddlers

A Day out in… Oyster Bay