Home Things To DoOut & About Bikes, Balls and Bubblers at Burnum Burnum Sanctuary
Out & About

A Facebook friend posted a video of her son cruising around on his bike. He is 6 months younger than Miss 3, so it prompted me to say to my husband that we really need to get cracking on teaching our kidlet how to ride.

We bought her a balance bike (the one without pedals) for her 2nd birthday. It looked pretty enough but she never wanted to use it no matter how hard we tried.

So after a couple of days it found a home in the garage collecting dust.

I insisted we get it out this past weekend and head to a park with a bike track in order to try our luck again, now she is a bit older.

A particularly ambitious endeavour given I was hobbling along, after managing to twist my ankle the day before.

When heading out the door, Miss 3 insisted on putting on her Frozen helmet to wear in the car.

Kids in tow and the bike in the boot we decided to head to Burnum Burnum Sanctuary in Woronora.

Not before I sent hubby back to the garage to grab the scooter, just in case.

About two minutes after we leave our driveway Miss 3 pipes up “Are we there yet?”

No not yet kiddo. “Ahh it’s taking such a long time” was her whiny response.

If you are coming from the Sutherland side of the Shire then you want to get into the left lane as you cross the Woronora Bridge. Just as you come off the bridge you want to turn left to go down the bends.

As we head down the bends and under the main bridge Miss 3 pipes up “It’s too dark” for the whole millisecond we are under the bridge.

At the bottom of the bends you need to cross the river and then take the first left to visit Burnum Burnum Sanctuary.

Besides the park, there is also a boat ramp and a canoe club. There was plenty of parking on Sunday morning when we went, despite the canoe club being open.

The park is not enclosed but it is a fair distance from the river making it a relatively safe option to take young kids. 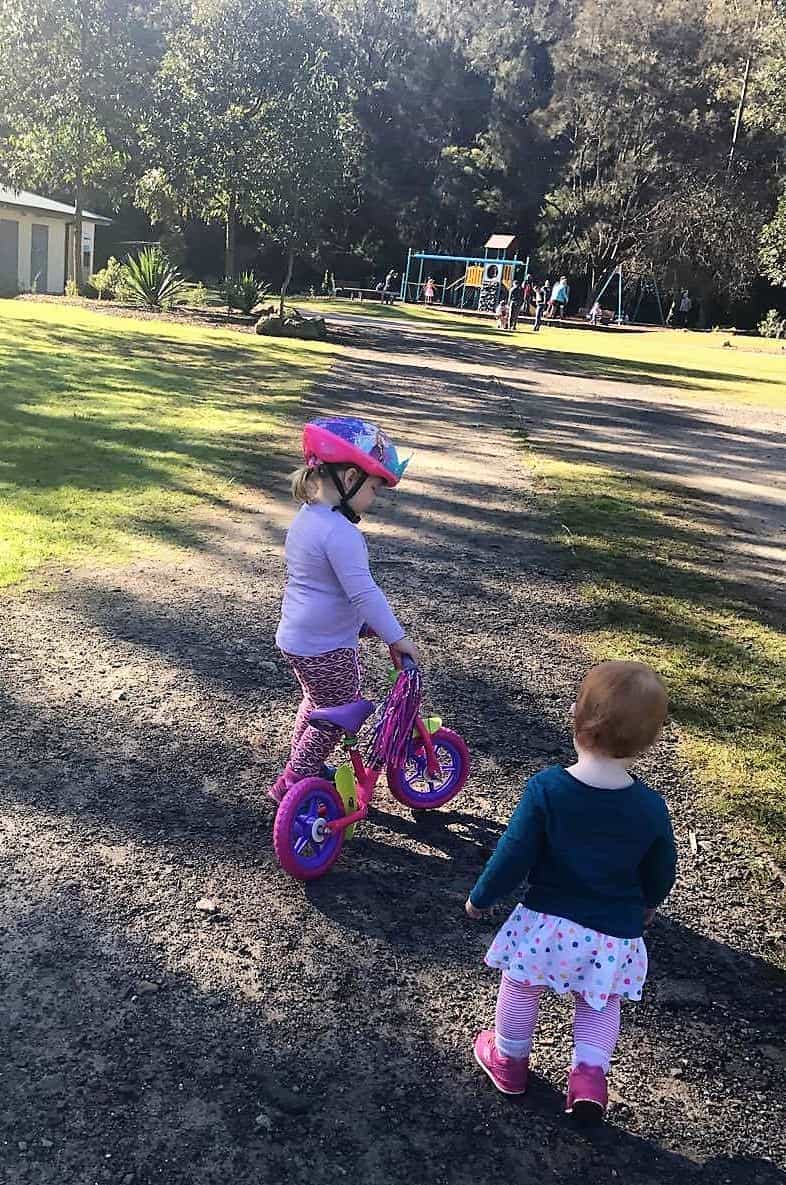 We grab the bike and scooter out of the boot and hubby encourages Miss 3 to give the bike ago. This lasts about 30 seconds before she has had enough and decides the scooter is her preferred mode of transportation.

The park has a bike path around it which is perfect for small bikes and scooter.

With hubby on scooter duties, hop-along Mummy is on duty watching Miss 1. She makes a beeline for another child’s bike helmet that is resting on a seat. Obviously seeing her sister having so much fun makes her want to join in.

I hobble after her to move her along, and she then finds another child’s ball which she tries to take. I make a note in my head to bring a ball along next week.

To save my ankle I decide to head to the playground and pop her in the swing. Miss 3 comes and joins her. This week I check the swing is one she cannot get stuck in. 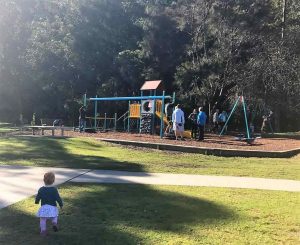 The park has a set of swings, a slide, see saw, bridge and small flying fox. As well as a little shop play area underneath. It was a good size for our girls aged 1 and 3.

There is also a larger flying fox for older kids, as well as a rope climbing frame.

There are toilet facilities, BBQs and shelters as well as lots of open grass space for a picnic. Making it an ideal place for a kids birthday party, particularly in the summer months.

After playing in the playground for a bit we decide to go for a bit of a walk. Miss 3 finds a duck pond and excitedly grabs my hand to drag me closer to the pond. 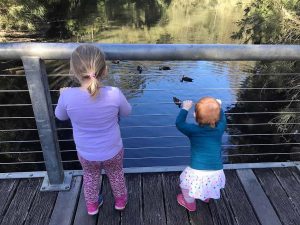 This is the same Miss 3 who only two weeks ago at the Camellia Gardens decided she was terrified of ducks.

Not today though. She shouted out to her dad and little sister “Come on you two, look at the ducks”.

There is a bridge where you can see the ducks, with a sign asking you not to feed them. We hadn’t brought any food anyway as we didn’t realise ducks were back in Miss 3’s good books.

The bridge is relatively close to the car park so with really little ones, you want to keep a close eye on them.

After spending some time with the ducks, Miss 3 advised she was thirsty so we find a bubbler located close to the playground.

She was excited to use the bubbler and daddy told her to put her face close to the spout. The water shoots out like a rocket and splashes her right in the eyes. Tears all around. From MIss 3 with her face full of water, and tears of laughter from people from the party close by who thought it was the funniest thing they had seen all day.

I was unprepared and had not brought drink bottles along, so we decided to call it a day and head home for lunch. 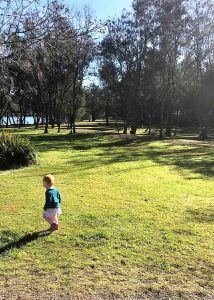 Burnum Burnum Sanctuary is a great alternative to some of the busier similar parks in the area. You can also access it via a walking path at the bottom of Bonnet Bay.

The gates are open from 6am to 8pm daily, or 10pm during Daylight Saving.

Cooking for Kids… Why Didn’t we just do Beans on Toast Again?

Get Moving with Shire Pram Walks

The Shire’s best parks and gardens

Spring Family Activities in the Shire

A day out in… Como

What a great story. Very funny and entertaining. So typical of a young family out on the weekend. Thanks for sharing.