A Walk Through the “Forest” at Centenary Park Miranda

Usually we head to a park for Sunday Fun Day. But this past weekend we mixed it up with a Saturday visit as Miss 3 had a party to attend on Sunday morning.

We have soccer first up so debate whether we chance our luck for a park visit before or after the younger one’s nap.

We settle on a before nap time trip. This week Miss 3 has a more positive response and squeals “yay park, park” and rushes out the door. She decides she needs to be ‘the leader’ so we all dutifully follow her to the car.

We have learned after a while to just go with it.

We make the call to go to Westfield for lunch afterwards, so head to Centenary Park in Miranda. It is located at 66 -74 Karimbla Road so only a block or so from Westfield. The gates open at 6.30am and are locked at 6pm night (6pm during winter and 9pm during daylight savings).

Arriving at the park we head into the car park and realise pretty quickly that there is a birthday party there today, so all the car spots were taken. I estimate there is about 20-25 spots usually.

We have been there on a weekday before and parking has never been an issue. Luckily this time on street parking was ok so we got a spot not too far away.

The park itself is really big and caters for kids of all ages. It is fenced but not completely, as there are two pedestrian entries and the driveway to the car park. So it’s not a totally free range option for the really little ones. But due to the size of the park you do tend to have time to swiftly chase them when they attempt a great escape. 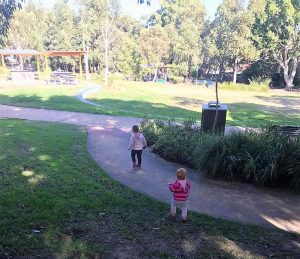 There are BBQs and tables. Or if all the tables are taken there is heaps of grass to have a picnic.

We head first down to the younger kids play area which is perfectly suited for toddlers. Our 15 month old loved the sand and water play area. She thought it was so much fun to pick up the sand and put it in her mouth. 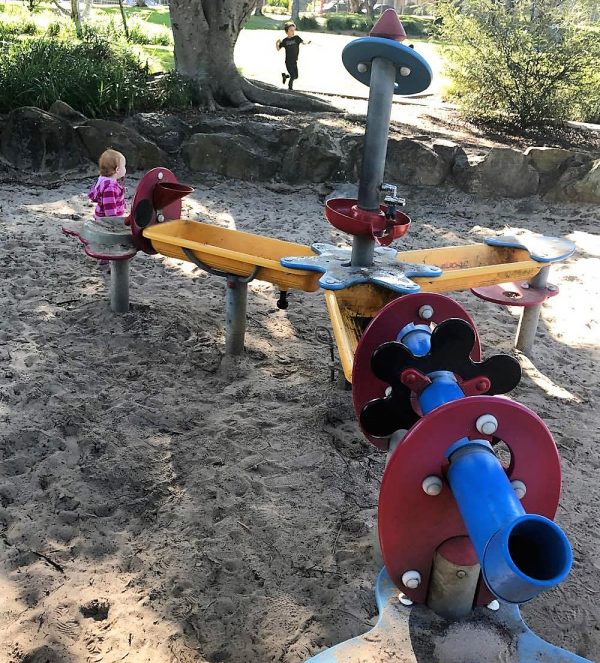 Both of the girls had fun on the little slide is in that area too. This area does not have a shade cloth but there is a decent amount of shade provided from the surrounding trees.

After playing here for a bit, Miss 3 decided she wanted to walk on the track to “the forest” just like Poppy does in the Trolls movie. 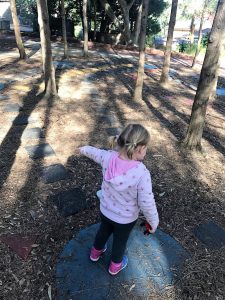 There are lots of little paths throughout the park suited for bikes and scooters. We walked past the flying fox, which is very popular with the older kids. Hubby wanted to have a go as he has done before when we have been here during the week. But I told him perhaps it was best to leave it to the kiddies today.

The “forest” is basically just some trees and there is some stepping stones. They are all different shapes and colours. So we had a little bit of time here exploring the different tracks.

Our next stop was at the larger play equipment area. It has two swing sets, a slide with ladder access, a rope climbing area as well as some spinning and bouncing equipment too. It also has shade cloth over the top which would come in handy on hot summer days. 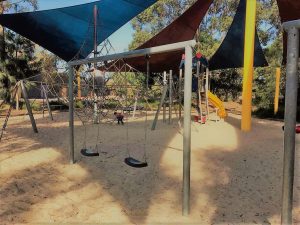 It’s better suited to slightly older kids, but our girls made a beeline for the swing set.

Their little faces lit up swinging up and down. All was fun and games until we tried to get Miss 3 out of the  swing.

We had popped her in the little kids seats with the back support to be next to her sister – not a great idea. 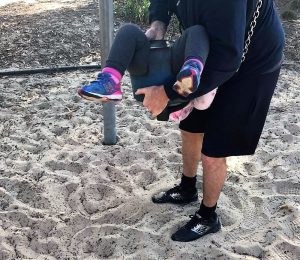 As the picture shows her chunky little legs got well and truly stuck. Me and my husband were a sight trying to squirm her way out.

She started getting upset and crying after the first 30 seconds or so, which of course attracted the attention of all the other parents in the park. Here I am trying to help her, but also make sure I get a photo of it for this article. I can only imagine what some of the other parents were thinking.

After finally contorting her way out, we had a quick go on the bouncing equipment before Miss 3 decided she had worked up the courage to give the big slide a go.

Hubby went to help her up the ladder and the older kid who had just pushed in front gave her a swift boot in the eye. Completely accidental (the kick at least, the pushing in not so much), but that swiftly ended our chances of getting on the slide.

We somehow managed to distract her and calm her down, before she said “I need to do wee wees”.

The park has two toilets which have baby change facilities. I would normally rate these types of toilets as survivable, just.

But on this day the plumbing was not working. Not fun.

Miss 3 got scared and refused to go, thus ending our trip to the park with a mad dash to the clean toilets at Westfield.

Later that night I went to look at the invitation for the party the next day. Just to check what time it started. Re-read the invite and realised the party was on that day – we had totally missed it.

Total mum fail. Thank goodness it was not one of Miss 3’s besties!

Cooking for Kids… Why Didn’t we just do Beans on Toast Again?

Busy Kids: It’s a jungle out there!

A day out in… Gymea

A day out in… Bangor