Why Elvis is winning at the box office

In 2019, I wrote a review of Rocketman, a film that depicted Elton John’s fame, fortune and struggles. I ended that critique by saying, “I think it’s going to be a long, long time until we see any musical biopic that rivals Rocketman.” Today, I headed back to EVENT cinemas in Miranda to see if Elvis might be the film to do it.

The hotly anticipated release chronicles the path of the ‘King of rock and roll’ and runs for 2 hours and 39 minutes. A movie of such length requires considerable snacks. I armed myself with a veritable bucket of icy Coke zero and Maltesers to mix into my box of warm popcorn before sinking into a cushiony leather V-MAX seat to be immersed in the story of Elvis Presley.

Interestingly, this is a story the film chooses to tell not through the point of view of the legend himself, but instead through the narration of his controversial and cunning manager, Colonel Tom Parker (Tom Hanks). Hanks is almost unrecognisable as the instrumental businessman who lays claim to “discovering” Elvis (Austin Butler) and helping him achieve a meteoric rise to fame, but who also had a hand in clipping Elvis’ wings. The film spends much of its time exploring the interplay between the two characters and masterfully portrays Elvis’ viewpoint even when we hear the Colonel’s voice. 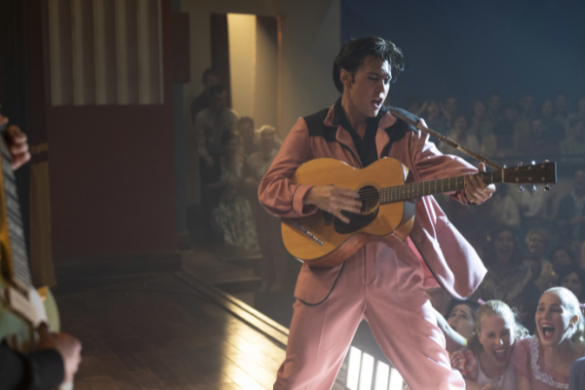 The film follows Elvis’ life from childhood in the forties up until his death in 1977. It does an exceptional job of meticulously copying his look, especially in the early years. To accurately embody ‘The King’, Butler (who beat Harry Styles, Ansel Egort and Miles Teller for the coveted role) spent more than a year doing voice training and researching Elvis’ moves and mannerisms’. Butler’s hips seem to nearly dislocate during gyrations, and he is every bit believable as the music-possessed crooner to whom teenage girls would toss their underwear.

At times, the script seems to wrestle with doing too much at once. Balancing the depiction of Elvis’ personal and professional relationships amidst the setting of key political events and cultural shifts in the fifties and sixties while also moving through Elvis’ chronology feels like a juggle. The storytelling, though, does enough to bring these issues into your awareness while being careful not to veer too far from the story audiences have come to see. 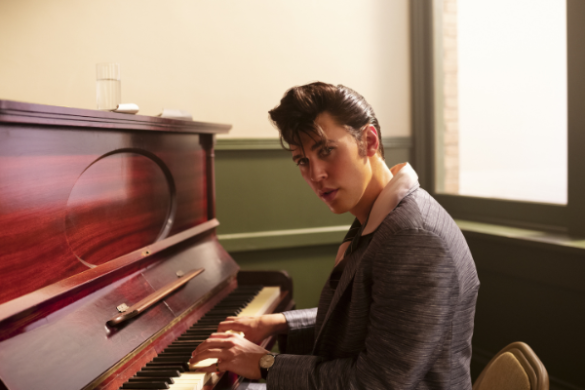 Elvis is aflush with the polished and proud signature style of its Aussie director Baz Luhrmann (Moulin Rouge!, The Great Gatsby). There is a richness that runs through the film from start to finish. For such a long film, it rarely feels dull or slow. This may, in part, be because Elvis’ demise, which the film seems to build towards, ultimately feels a little rushed. However, it could just as easily be because Elvis is so stylistically exciting. The visual storytelling combines spliced actual footage, split screens and varied transitions that interest your eyes. At the same time, the musical performances offer more than enough enjoyment for your ears. Then throw in meticulous attention to changing fashion throughout the decades, real and replica Elvis costumes, and strong performances from the supporting cast. You might even realise the movie has finished before your popcorn.

All in all, Elvis feels poised to take a deserving place alongside other grand biopics like Bohemian Rhapsody, Rocketman and Walk the Line. The finished product provides insight into a man and musical legend whose work and legacy is lesser-known among younger generations. It also presents just enough social commentary on the music industry and the era Elvis lived through to serve as your final encore.

With its longer running time, Elvis makes for the perfect movie to see in Gold Class. Book your tickets at EVENT Cinemas now!

Please note: We don’t recommend taking kids under 15 as the film is M-rated (and like most good movies about rock and roll, it contains adult themes including sex and drugs).

Why do so many little girls love pink, frilly dresses?

You Know You’ve Got A Newborn When…

Struggling with loss or loneliness? Griefline can help

The Plumbing Essentials Your Kids Need to Know...

How to get rid of ‘Mum-Guilt.’