We’ve seen our fair share of the Sutherland Shire Council’s string of playground upgrades and few have received more equipment than the upgrade at Engadine’s Woronora Rd Reserve.

It’s number 97 if you’re punching it into Google maps and there’s stacks of parking alongside and around the park.

It’s gated and fenced on three sides (and the fourth side is bush so you won’t have to worry about little ones with no regard for road safety.)

The bush happened to be the first things my kids wanted to explore so we had a little walk around, climbed some trees and counted their rings where trees had been cut.

The trees came in handy again when my youngest need to do a wee as there aren’t any toilets at the reserve.

But on to the play equipment.

Everything is set on bark and surrounded by a great scooter path.

Keep this park in mind for the hot summer days as even in the middle of the day this spot is well-shaded and it provides plenty for kids under 10 to keep themselves very busy!

There aren’t any super handy cafes or takeaway shops within walking distance, but you’re only about three minutes drive away from Engadine’s hub of cafes and restaurants if you fancy picking something up on your way.

New seating has been installed (a few benches and one picnic table) and there’s also heaps of space for spreading out a picnic blanket as well as a handy water station, but sadly no bin. 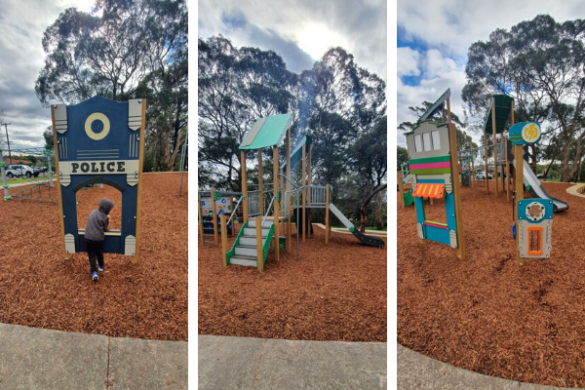 The Simple Trick to Banishing Boredom in Your...

A Sunny Sunday in Como

A day out in… Como