4 tips for your Fussy Eaters

Accredited naturopath and nutritionist Claire Luckman is here to offer some helpful tips to parents of picky eaters.

Any parent of young children knows how disheartening and downright frustrating it is to prepare and serve up a nutritious meal to their children only to be told it’s “yucky”, followed by a battle to see even the tiniest morsel make it down their throats!

Every child will go through phases of fussy eating, however, if your little one seems to fight you on every offering of food then try these tips to see if you can make mealtime a little less stressful.

Engage your kids in cooking and meal preparation, they love to get messy in the kitchen and research shows they are more likely to try foods when they have helped to prepare them. Keep mealtimes sociable and family-orientated—again research shows that when children eat with their family members they eat more nutritious foods, learn valuable social skills and even perform better at school!

2. Keep exposing them to “yucky” foods and start early

There are always going to be foods that children will say they don’t like and that’s ok. The trick is to keep exposing them to these foods even though they say they don’t like it and don’t want to eat it. This certainly does not mean forcing a child to eat the food they dislike, as research suggests this can lead to unhealthy relationships with food. Rather just ask them to try the food- if they say no then just leave it be and try again at another meal. Rotating different veggies or foods is often useful too as children will go through phases of loving a certain food and eating lots of it, then suddenly turning their nose up at it! Drop that veggie off for a little while, then bring it back in and you might be surprised to see they’ll happily eat it again.

Exposing babies and infants to a wide range of food as early as possible also proves to be a great way to shape their taste buds and teach children about eating a variety of foods. People often shy away from introducing their infant to spices, bitter foods or intense flavours but it’s great to get them used to a variety of flavours as young as possible. Cinnamon, nutmeg, garlic, bitter veggies like a rocket pesto are great places to start and can all be added to meals in small amounts when introducing solids. 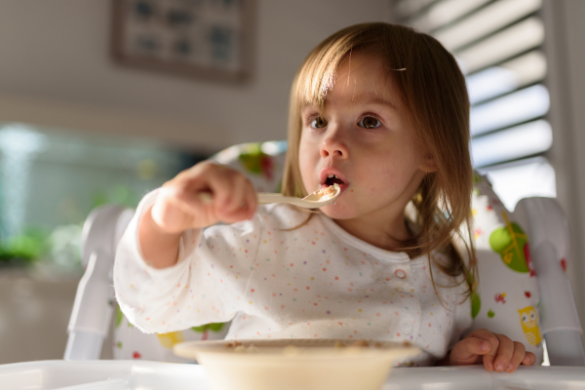 Kids are constantly observing and learning from the adults in their lives and will mimic your behaviour when it comes to food and eating. It’s easy to forget that young children are watching and learning from us when they can’t communicate with words yet, but never underestimate the power of leading by example. Show your little ones that you are open and willing to try lots of different foods and try not to use negative words or phrases when you try a new food (or something your partner has cooked that’s not your favourite meal!) as they will quickly mimic this behaviour. One study on this topic demonstrated that a positive parental role model may be a better way to improve children’s diets than by attempting to control exactly what children eat at every snack and meal, especially as they get older and are able to have more independence over their food choices (Brown & Ogden 2004).

Children are natural grazers and love to pick at different options of food throughout the day. This is normal and often a good way to get a variety of nutrients into your child, as you can offer them little bits of different foods to snack on. However, if you have a child who loves to snack and then barely touches their main meal, you may need to pull back on the snacks or leave a good 1-2 hours before their main meals that are snack-free. If your child gets hangry easily, then make their last snack before the waiting period a protein-dense snack, like a boiled egg or some good quality cheese and seed-based crackers. 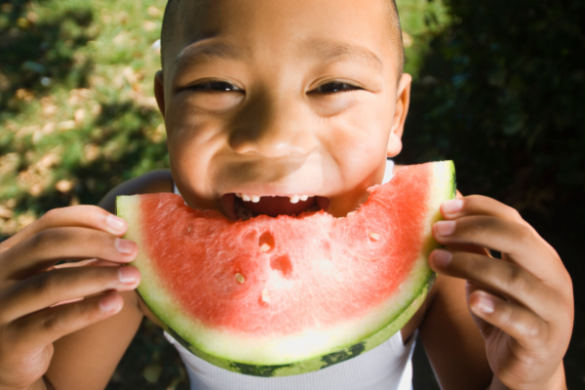 Children also go through natural periods of eating less, and then suddenly increasing their intake as they hit a growth spurt. Unless your child refuses food for a longer period, try not to force-feed them if they seem disinterested for a couple of days. Their appetite will naturally pick back up again and remember that you too may occasionally just not feel like eating as much as usual.

There are occasions when a persistent lack of appetite is due to nutritional deficiencies that can be common in children, including zinc and iron. If you’re concerned about your child’s appetite (and often subsequently their mood and behaviour) then please get in touch, as working with children and families in the clinic is a passion of mine.

This article was originally published on ClaireLuckman.com.au by qualified nutritionist Claire Luckman, and has been published with permission.

I’m Claire Luckman, accredited Naturopath and Nutritionist practicing in Sydney’s Inner West and the Shire. As a mum of two little people, I’m passionate about empowering parents to utilise whole foods and natural medicine in order to achieve great health for their families.

The Little Things … Aren’t So Little

Local mums put the spotlight on a little-known...

Get Moving with Shire Pram Walks

Are you run-ready? Tips for new mums and...

The Perfect Antidote to #mumlife Stress

Keep your children healthy during cold and flu...